Hello Pippa and Trisha,
you won’t BELIEVE the week I’ve had.
The good news is, I have arrived in the Land of Belly Rubs.  All.  Day.  Long.   The bad news is, cats are sharp.
So many PEOPLE!!  Little boys, bigger boys, the Dad, the Mom, and the Girl.  They have WALKED my PAWS OFF.
I have a Pupper Palace all my own (the humans thought I’d be bigger, I could fit two of me in this crate!) – but the Biggest Boy lets me sleep in the bed with him.
I went to the Place Of Needles and Mr Vet pronounced me “a good one”.  He took care of the one the humans called Noah.  Evidently I have some big paws to fill, but I think I’m up for the challenge.  Mr Vet gave me a needle called Lyme, and I got my first tick five hours later, because the Mom took me for a looooong walk through The Woods.  Hummph.  Guess he knew what he was doing.
Pippa, thank you for taking good care of me until my People could find me.  And, The Mom says to thank you VERY MUCH for letting her best friend meet me before I left, because the Friend knew the Noah and she would be sad if the Friend did not know me.  The Mom says I am to stay here with the People, now, but the Pippa was kind to me and I will miss her.  But maybe, just maybe, I will like it here, too.
love,
Jay Jackson
(Wynton Chenier – yeah, don’t ask, I’m named after some famous dude who plays trumpet and so does my Boy)
p.s. The Mom also says my photos on Petfinder/SOSARL was how she found me, and felt drawn to them, and kept going back to them, and just can’t quite believe that I’m really here – so you can take down my photo now, because she loves me and she’s MINE. 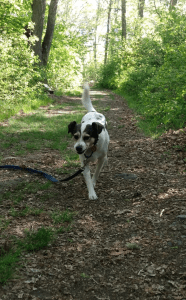 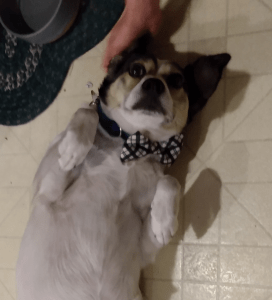 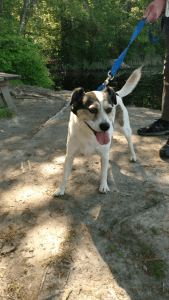